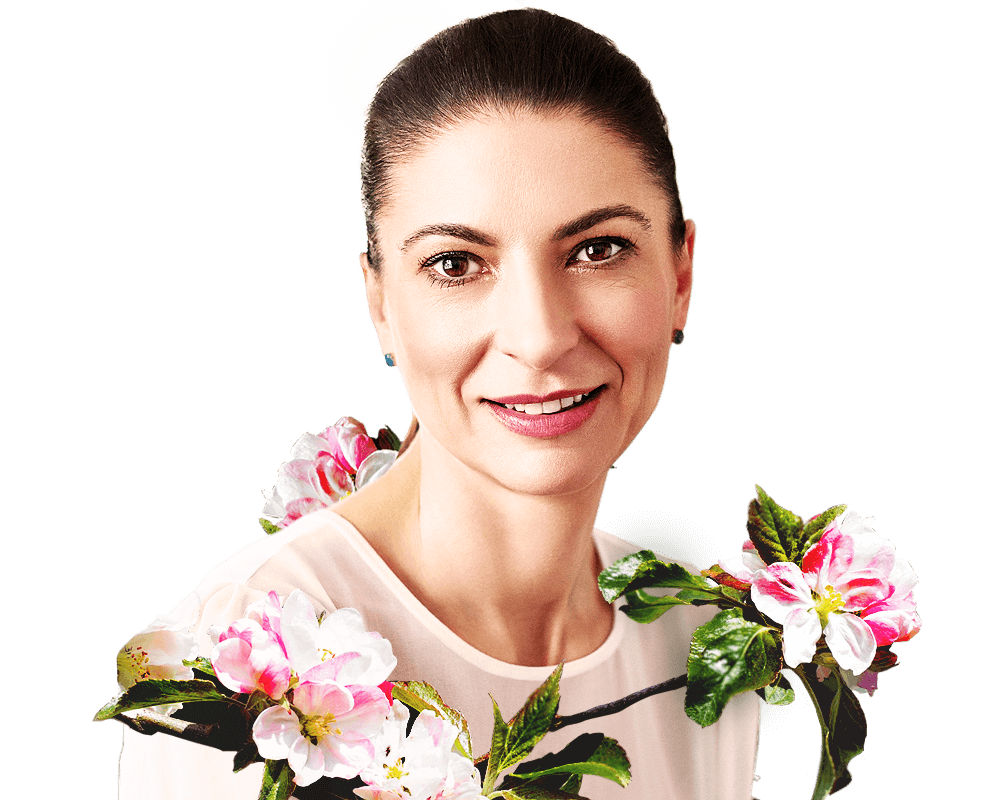 My name means „apple tree in blossom” and it emphasizes my Bulgarian roots. I owe it to my mother who is a classical musician. My father was an engineer. I was born and raised in Poland, but I’ve maintained close relations with my Bulgarian relatives. I used to love spending summer vacations at my Grandma’s in the Rhodope Mountains. My first occupation is a medical doctor, a neurologist, and I still practice. In 2004 I received a PhD degree in medicine (MD-PhD). I hold the position of a Secretary of the Polish Society of Epileptology.

As a writer I debuted in 2011 with a non-fiction book “Tam, gdzie urodził się Orfeusz” (Orpheus Was Born There), telling the story of my Bulgarian ancestors and describing the culture of Rhodope region, where my family lives. I wrote it for my children thinking my first book will also be my last. But it wasn’t to be so. I wrote more than twenty books since then, the most popular being “Stulecie Winnych”(Century of the Winny Family) (1-3) adapted to a television series by TVP and presented in three consecutive seasons 2019, 2020 and 2021, to a record-breaking audience of 3 million viewers weekly. I had a chance to get involved in the series playing cameo parts in every season and acting as a historical and medical consultant.

So far my literary output includes a four-part cycle of children books (“Julek i Maja w labiryncie” / Jules and Maya in the Labirynth), a dystopian fantasy novel for young readers (“Nowy świat” / New World), contemporary fiction (“Coraz mniej olśnień”,  / No More Dazzles “Lady M.” and “Lot nisko nad ziemią” / Flying Too Close to the Ground), a three-part historical fantasy “Alicja w krainie czasów” / Alicia in the Land of Time, a crime story “Ostatnia chowa klucz” / The Last One Hides the Key, and a historical thriller “Kości proroka” / Bones of a Prophet. A special place among my books belongs to a novel “Matki i córki” / Mothers and Daughters, telling the story of three generations of women submitted to mysterious traumas, both personal and historical.

2021 happens to bring three new books of mine. “Doktor Anna” is a second part of my medical trilogy „Uczniowie Hippokratesa” / Hippocrates’s Disciples (initiated by “Doktor Bogumił” / Hippocrates’s Disciples: Doctor Bogomil in 2020), a love-story „Rzeki płyną, gdzie chcą” / Rivers Flow Where They Please and also – written in secrecy – a prequel to “Stulecie Winnych” disclosing the events preceding my popular saga known from books and television. Also recently I wrote a libretto to the musical „Pora jeziora” for Filharmonia Warmińsko-Mazurska in Olsztyn (premiering in 2021), and now I’m mainly involved in writing scripts for feature films and television.

Beside good literature I love music, theater and film. I have three children – Julian, Alina and Franek – three cats and a dog. I live in a little town of Brwinów, just outside Warsaw.